A case study about Michael Mason

After being diagnosed with Macular Degeneration, Michael Mason stopped driving, and subsequently was registered blind. Unable to travel independently or read, he had also given up some of his favourite hobbies, such as watching television and keeping up with sports. His life had become increasingly restrictive and he had become incredibly isolated. ‘Life was getting me down. I couldn’t do anything. I was getting fed up.’ Unable to see the faces of his friends and family, Michael’s social interaction began to dwindle, and he found himself more and more shut away at home. ‘Life seemed a waste until I got Sight+’

Then, in 2017, Michael saw Sight+ featured on BBC Breakfast. He immediately called GiveVision and a few weeks later, a friend took him to a testing session organised at RNIB Liverpool. ‘I could read nearly all the sight chart.’ ‘Elodie showed me a tennis match on a computer and I could see the score.’ ‘There was nothing to think about, I wanted to try it.’ ‘The first things I did was to pick up some post, put the TV on and tried it in the kitchen. The possibilities became endless’. After just one week of trialing Sight+ in his home, he decided to keep it, and it has become an essential day to day tool for him ever since.

From reading his medication, to operating kitchen appliances, Michael found Sight+ gave him a new sense of freedom and independence. He is now able to enjoy watching television at a comfortable distance, and is able to keep up during football matches. Sight+ is incredibly useful for selecting programmes on the television and reading the remote control, as it performs seamlessly for long distance use. He can now read the newspaper to do the crossword and is now able to take ownership of important papers that come in the post without assistance from anyone. For more short distance use, Sight+ also helps visually impaired people interact with paper again. This gave Michael the privacy and independence that everyone deserves. ‘Sight+ is life changing’.

Michael experimented with the device and rediscovered so many things he hadn’t been able to do for years. He can now make out cheques and read the gas and electric metres. He enjoys taking Sight+ shopping with him. It gives him the independence to browse and buy his own clothes in privacy. It’s also easy to look for ingredients and best before dates on food labels.

Sight+ has been of great value for Michael’s social life. He feels comfortable enough to use it with friends and family. He can now see the faces of his loved ones and see them smile at a comfortable distance for everyone. Whether he’s sitting outdoors or having a picnic in the park, Michael can now see some of his surroundings and enjoy more fully the environment around him. This includes seeing ducks in the pond and enjoying a clear blue sky. 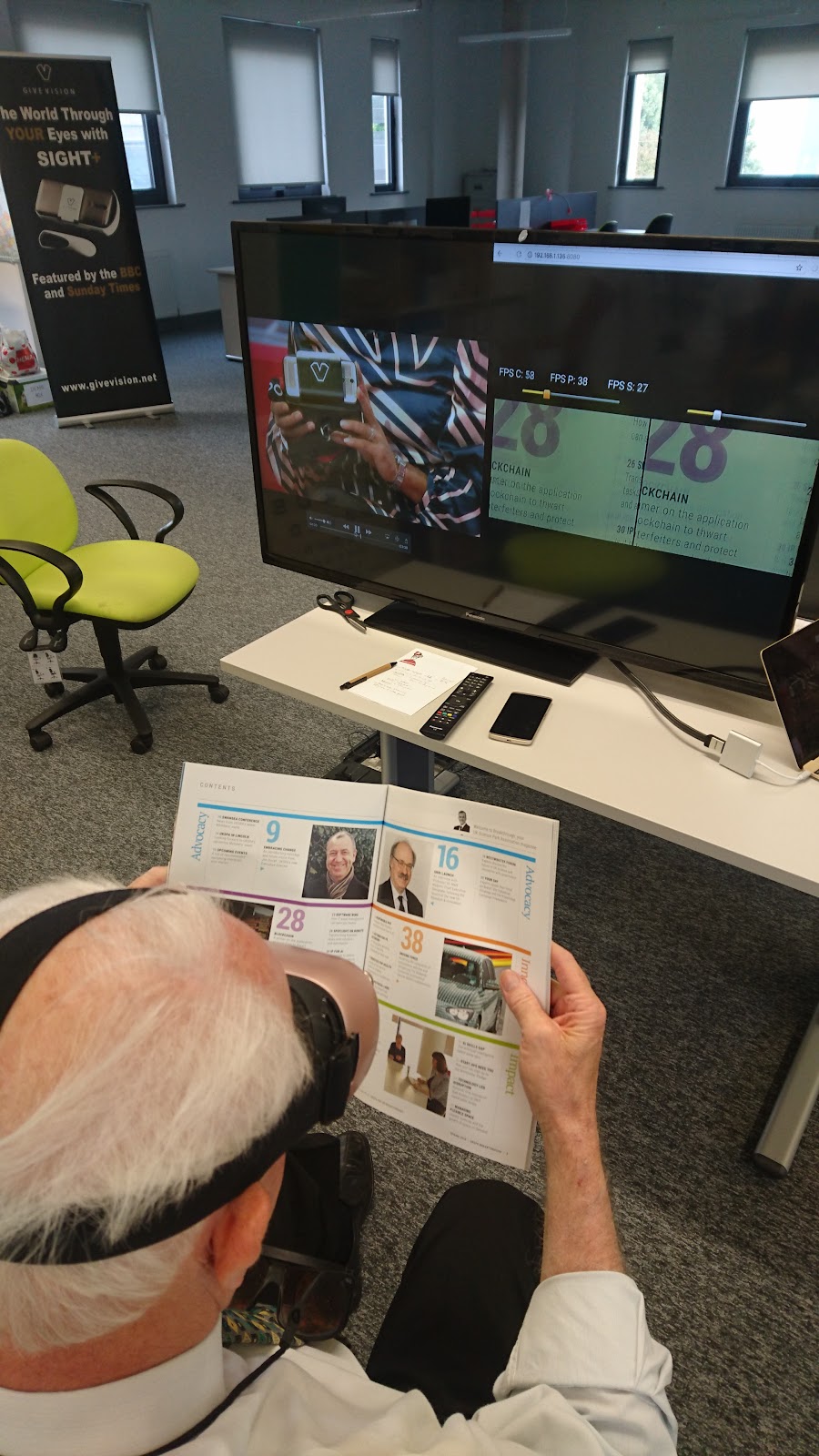 Since adopting Sight+ two years ago, Michael has been supporting the product development team to improve the device’s functions and usability. He also regularly showcases Sight+ to his local communities of visually impaired people.

His advice for them is:

- to give it a try. Even before testing, some people can assume that it is not for them for various reasons but it is hard to explain how it can really help if you don’t wear it.

- to have the patience to try activities, even when you have coping strategies for them.

- to not be afraid to ask people to help you when you have the device for a home trial.

My father turned a healthy 90 years last October 2019. He has very poor vision on his right eye and is completely blind on the left eye. He was an avid plastic aircraft model builder but is unable to do anything much now because of his poor eyesight. Would this vision aid be able to help him continue a productive life building his airplane models like he used to?...
Phenomenal the difference Give Vision has made. Even now I can only imagine the improvements they are making and the technology they can use to improve other impairments. Maisy is an inspiration for all....
Bonjour Sylvia, Nous avons plusieurs utilisateurs avec cette condition. Nous avons essaye notre tech a differents stades de progression. Si vous utilisez regulierement une loupe ou un appareil pour zoomer, il y a de fortes chances que SightPlus ameliore votre vue. Pour le moment, nous organisons des essais en Angleterre uniquement. Tenez-nous au courant si vous avez l'occasion de venir! :)...
Hello I live in paris and have stargart macular degeneration hereditary desease. Have you tested your devise on patients with this type of pathology? Cordially, Silvia...
Thank you for reaching out! We have a few users that have LHON. Unfortunately we organise testing sessions in the UK at the moment but I'll keep you posted if there is any opportunity to try SightPlus in the US....
We live in NYC, and my son has LHON - no central vision with some peripheral. They classify his sight as fingers only. My son tried the esight goggles from the Canadian company esight, and it did not work for him....